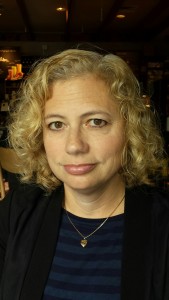 An Interview With Novelist Pamela Berkman

Mary: Welcome to People Who Make Books Happen, Pamela. Could you please start by telling us how you decided to write about Shakespeare? What led you to choose him as a subject for historical fiction?

Pamela: I have always, always loved Shakespeare, loved the plays, loved the language. In the end though, I wrote my book of Shakespeare short stories, Her Infinite Variety, in reaction to the movie Shakespeare in Love. That movie spawned a bit of a Shakespeare trend in fiction. But I wanted to challenge the way his wife Anne is dismissed with a line or two in that screenplay and in most people’s minds. There are so many misconceptions, beginning with the idea that she was an aging spinster he married for her property and because he got her pregnant. But when she married William Shakespeare she was the 26-year-old, well-thought-of daughter of an important local family. I got interested in all the women who surrounded Shakespeare and who appear in his plays, and went from there. I found out amazing things. There is a lot of very rich stuff about his relationships you don’t even have to make up.

Mary: Please tell us what you’ve written about Shakespeare.

Pamela: Among other things, I wrote Her Infinite Variety: Stories of Shakespeare and the Women He Loved.

This is a collection of short stories, each of which is written about or from the point of view of a female character in one of his plays or a woman who was actually involved in Shakespeare’s life. I wanted to try to tell their untold stories, especially the stories of the ones who are passive or voiceless or vilified. What was going on in Ophelia’s head? How does Juliet’s mother feel about what happens to her daughter? What’s Lady Macbeth’s side of the story? Why did Shakespeare’s daughter Judith marry such a cad? What kind of mother was Mary Shakespeare, and why?

Mary: What kind of research do you have to do to write about Shakespeare? Do you enjoy doing this research?

Pamela: I actually had a reasonable working knowledge of the Tudor period just because I was always interested in it. But when I started to dig around for details in Shakespeare’s life and plays, I found there was a rich vein to be mined. The documented facts about Shakespeare that we know about are few, although every now and then something new turns up.

My favorite part was discovering little jewels that I could spin into a story. For example, about a hundred and fifty years ago someone found the legal record of the incident that was the spark for my story “Mary Mountjoy’s Dowry.” Shakespeare, it seems, was the go-between in getting the daughter of the family he was lodging with in London married. The bridegroom sued the family for the money he was promised, and Shakespeare had to testify. So I thought about what family and interpersonal dynamics might have been going on there, especially between Shakespeare and that young woman. Then there are things about him that didn’t make it into my stories, at least not yet. For example, after Shakespeare’s death his daughter Susanna sued someone for slander because he had said she had a sexually transmitted disease. She won.

Mary: What other historical novels about Shakespeare would you recommend? What do you like most about these novels?

Pamela: I haven’t yet found anything that really grabs me. Maybe that’s why I’m writing about Shakespeare again, for myself, because I haven’t yet found the novel that’s perfect for me. But there are some new ones out there that I want to give a try. As soon as I get some time, I want to read Dark Aemilia, by Sally O’Reilly, which puts a magical spin on one of the possible candidates for Shakespeare’s Dark Lady, the poet Aemilia Bassano. And Mary Sharratt, who is such a terrific writer, is also coming out with a historical novel about Shakespeare and Aemilia called The Dark Lady’s Mask, which I’m looking forward to. There’s a lot of genre mystery and romance out there now. And there’s a type of story that uses Shakespeare’s life and work as a jumping off point, like the science fiction novel Station Eleven, or contemporary novels like The Tragedy of Arthur by Arthur Phillips, or The Weird Sisters by Eleanor Brown. Neil Gaiman depicts Shakespeare and his wife in Sandman. I even saw a Dr. Who episode about him.

I guess it’s only natural that writers would be drawn to exploring the psyche of this man who is often called “the greatest writer who ever lived.” Everyone has their own take on him – charming and confident, tormented and guilty, whatever.

Mary: I understand that you’re working on a novel about Shakespeare right now. This is exciting news. Can you give us a little sneak peek at it without giving too much away?

Pamela: There’s a tradition, with some possible evidence, that Shakespeare served as a schoolmaster “in the country,” in his youth. In the novel I’m working on, he has to flee home as a teenager to go be a tutor in a great house in Lancashire. Adventures follow. I’ll leave it at that.

Mary: Traditionally, all English majors are required to take a course in Shakespeare. Do you think he’s still relevant?

Pamela: Oh, absolutely. His psychological insight, his understanding of human motivation, his fully formed characters – all those things are timeless. That said, it’s important to remember that not everything he wrote was Hamlet or King Lear. He had his early clunkers, too. Even Shakespeare had to develop and mature as a writer. Which is so interesting and cool. I understand that the language puts some people off. I say, just relax and read it to yourself in a conversational tone, and see what shines through.

For example, really read the “To be or not to be” soliloquy all the way through and appreciate how many of the lines have become part of our lexicon. No other writer of his time wrote so prolifically or wrote so many stories with such variety and such memorable language. And believe me, no Elizabethan playwright or poet, not Christopher Marlowe, not Ben Jonson, nobody, even comes close to writing women like Shakespeare did! Not the sheer number of characters, not their complexity, and not their variety.

Mary: Thank you, Pamela. It’s always a pleasure to talk to you. I’m looking forward to learning more about Shakespeare when your novel is published.

Pamela Berkman’s two short story collections were published by Simon & Schuster. The title story of The Falling Nun was nominated for a Pushcart Prize, and Her Infinite Variety: Stories of Shakespeare and the Women He Loved made the San Francisco Chronicle bestseller list. Her short story “Duty,” about Juliet Capulet’s mother from Romeo and Juliet, appears in Houghton Mifflin Harcourt’s high school textbook Collections. Pam holds an MFA in creative writing from Warren Wilson College and worked as a reporter before settling into publishing, where she is now a production manager. She lives in the San Francisco Bay Area with her husband and two young Tasmanian devils – er, sons.

Join this  People Who Make Books Happen conversation with Pamela Berkman. You are warmly invited to leave a comment.

This site uses Akismet to reduce spam. Learn how your comment data is processed.

Mary Mackey is New York Times bestselling author and award-winning poet who has written fourteen novels some of which have appeared on the New York Times and San Francisco Chronicle Bestseller Lists. She is also the author of eight volumes of poetry including The Jaguars That Prowl Our Dreams, winner of a the 2019 Eric Hoffer Award for Best Book Published by a Small Press and a 2018 CIIS Women’s Spirituality Book Award;  and Sugar Zone, winner of the 2012 Oakland PEN Josephine Miles Award for Literary Excellence.  Mackey’s novels have been translated into twelve languages including Japanese, Russian, Hebrew, Greek, and Finnish. Her poems have been praised by Wendell Berry, Jane Hirshfield, Marge Piercy, and Dennis Nurkse for their beauty, precision, originality, and extraordinary range. Garrison Keillor featured her poetry four times on The Writer’s Almanac. Also a screenwriter, she has sold feature-length scripts to Warner Brothers as well as to independent film companies. Mackey sometimes writes comedy under her pen name “Kate Clemens.” She has a B.A. from Harvard College and a Ph.D. in Comparative Literature from The University of Michigan and is related through her father’s family to Mark Twain. At present, she lives in northern California with her husband Angus Wright. ” Lowenstein Associates recently published her novel The Village of Bones, a prequel to her bestselling Earthsong Series.